My quest continued. I came across a number of implementations but most of them were lame approximations of a proper page curl. The most promising one was by CodeFlakes that promised very good page-corner-tracking using touch events, so a user could drag the corner around, but it didn’t attempt to curl – it used shadows and gradients to fake the effect. When I queried this they said nobody had asked for real curling.

Then I came across this blog post by W. Dana Nuon: Implementing iBooks page curling using a conical deformation algorithm which was pretty close to what I wanted, except it used OpenGL – as yet an unknown quantity to me. I downloaded the code, examined it, tried to ignore the mathematics involved and eventually decided to use the concepts from it in my code. This took a while and I ended up with acceptable results, at least to be going on with. I parked the issue since I had working code and I wanted to focus on other aspects of the project.

Eventually I came back to it after I was working on some code to pre-render pages that touched the OpenGL code. As I dug in to it my confidence grew and then I finally decided to brave the math since I wanted to develop a touch-tracking mechanism, to drag the page around. 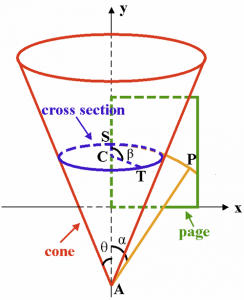 The basis of the conical deformation came from a research paper published by Xerox PARC on the topic where they used a cone with parameters that varied over the course of the transition as an approximation of a page turn. The model assumes a cone, apex-down, with a vertex running from that apex on the y-axis (that is, x=0). The y coordinate of the apex is a variable, A. The other cone parameter is the angle, θ, between the surface of the cone and a vertex that runs from the apex through the center of the cone. They then add a third parameter, ρ, which is the rotation of the entire page about the y-axis. The PDF from PARC linked above has a reasonably descriptive diagram showing this arrangement which I have shown here. Nuon then empirically determined a heuristic based on time t that varied these parameters to produce a reasonable animation.

The original algorithm for mapping a point onto the surface of a cone, from Nuon’s sample code and taken directly from the mechanism described by PARC, looked like this:

When I started to dissect this algorithm, ostensibly to invert the equations, I came across some significant hurdles. The most significant one was that the cone deformation, as implemented, had a serious limitation of where it would position the corner of the page in the view-port. There were two major elements to this limitation:

After messing around with a sheet of paper for 30 minutes and after examining some sketches of a page curl I decided I could overcome most of these limitations if I could introduce flat-parts into the deformation. In effect, I wanted to add an x-component to the position of the apex of the cone and limit how far around the cone a page would curl. It was time to dust off the trigonometry that I had not used in twenty years.

Using my imagination, I called the new parameter B (meaning that {x,y} of the apex would be {B,A} in the code) and once I realized it was a small matter of offsetting in the right places and conditionally transforming a point, ended up with this:

The effect of this code is to provide a flat page prior to the cone, which starts at x=B. Experimentally I found that the useful range of θ was about 18 to 30 degrees. I then wrote some code to map an arbitrary {x,y} point to the parameters for the curl and, though it was better than for the stock deformation, it was not perfect:

In particular, though the corner does move with the touch location, it’s not directly under it. I decided this was a matter of refinement but, more pressing, there was still a significant limitation to where it could place the corner of the page – it needed to flatten the page after the cone in order to reach more places.

This proved to be rather tricky. In order to do this, you need to transform the points relative to the last position they would have had on the cone. All of the math discovered this location in terms of the distance from the apex, which is a function of the original 2D position. Not something that can be easily inferred from an arbitrary point.

Would a tube work?

Instead of going down a path of nasty trigonometry, I decided to attack it from a different angle. Instead of a cone, why not a cylinder whose point of rotation was freely movable? The geometry involved would be much simpler – and it should be pretty easy to reverse, too. I went and found a kitchen paper-towel tube and a sheet of paper and convinced myself it was a reasonable model.

Cylinders are pretty easy objects to draw in 3D – it’s just a 2D circle, in our case with radius C, that you transform into 3D and then extrude. A bit trickier is using this simple model and wrapping a page around it – this is because the page doesn’t simply follow the cylinder around in a circle, it’s an ellipse and for a given plane in the 2D page, one complete revolution around the tube does not end up at the same point it started – just wrap a page around a tube to see. The page travels up the tube when it’s at an angle.

The code to perform this deformation ended up reasonably clean, if not as simple as the conical one looked:

Now this is not perfect either, in particular, for values of

there is a small tendency for the page to curve below the y-axis a little. This I hope to remedy later. It’s also straightforward to curl from a different corner, or even an edge, thanks to the complete flexibility of the rotation point of the cylinder. Significantly, however, the logic to map an {x,y} location to deformation parameters proved, if not straight forward then very achievable.

But can you touch it?

With this, it was apparent that

. With substitution, you end up with:

and you know what? It works. Calculating θ was simple Pythagoras and I ended up with: 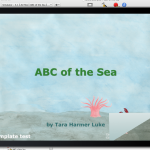 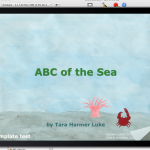 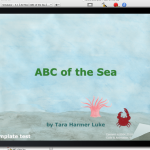 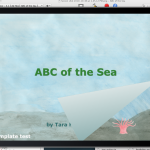 And there we have it. There are further refinements to make – for θ approaching

our OpenGL vertices have a problem coping and the edge of the curl looks ragged. There’s the problem noted above with the curl dipping below the x-axis. And for larger values of c the touch tracking code loses accuracy. But these can all be worked on.